Eliza Clark December 29, 2011
We all know just how impossible it is to find a babysitter on New Year's Eve. And we also know just how impossible it is for the little ones to stay up far past their bedtimes, much less til midnight. So does life with young children mean an end to New Year's Eve fun?
It's a valid question, but we're here to tell you: not at all!!  In fact, with a little mental rejiggering and a few Savvy ideas, you may find that ringing in the New Year with the kiddos is more fun than any of the tipsy, late night dance parties of your past.
Here are our tips  for a happy, memorable celebration:
Invite over another family or two with kids so that all ages have great company and dance partners.
Reset all the clocks and then set the alarms. Pick a time that will work for the little ones -- say 8 or 9 o'clock -- and set your clocks forward so that midnight strikes at that hour. Then, for extra excitement, put all of the clocks in the house together on a table and set the alarms! That way you'll know exactly when to pop the bubbly.
Keep to an easy, pot-luck menu -- we've all done a lot of holiday cooking already! Some sort of bean dish (or black eyed peas) and grapes traditionally represent good fortune in the new year (and most kids like them... all the better!).
Provide the requisite noisemakers and party hats. Or better yet, have your preschooler help you create pretty cut-out paper crowns for all the pint-sized guests.
At the magic hour: champagne for the grownups, juice for the little ones, kisses for all, and your favorite dance music!
http://www.savvysource.com/parenting/5565-a-new-years-eve-bash-with-kids
Posted by Preston Kiddie Kollege at 10:39 AM No comments:

Toddlers Hear Their Own Words Differently, Says Study
Ever wonder why toddlers just can’t seem to get the pronunciation of some words just right? Science may now have an answer.
People subconsciously monitor their voices to ensure the sound they are producing is the one that is intended. If it is different, we are able to change that tone, but new research found that toddlers do not monitor their voices in the same way.
“Surprisingly, 2-year-olds do not monitor their auditory feedback like adults do, suggesting they are using a different strategy to control speech production,” lead author Ewen MacDonald of the Technical University of Denmark told ABCNews.com.
MacDonald said monitoring one’s voice is similar to musicians playing music. For example, violinists adjust their fingers to bring a note that is out of tune, in tune.
In the study, published in the journal Cell Biology,  a group of adults, 4-year-olds, and 2-year-olds said the word “bed” repeatedly while simultaneously hearing the word “bad” through a set of headphones. Everyone was able to adjust their speech to continue to say the word “bed,” except for the youngest age group.
The findings are surprising because infants can detect small changes in the pronunciation of familiar words in their native language, MacDonald said. By the time American children reach age 2, they have an average of 300 words in their vocabulary.
One reason for the findings may be due to the way children communicate with their caregivers, researchers noted.
“One possibility is that the 2-year-olds may rely on the person they are talking to instead of monitoring their own voice,” said MacDonald. “If you look at interactions between young toddlers learning to speak and their caregivers, you will often hear the caregiver repeating or reflecting back what the child has just said.  It may be this interaction that is helping children judge their accuracy in producing speech.”
But Diane Paul, director of clinical issues in speech-language pathology at the American Speech-Language-Hearing Association, said the task itself may be too challenging for this age.
“They don’t have the linguistic experience and developmental ability yet to self-correct,” said Paul. “Young children may mispronounce certain sounds (sounds that typically develop later). But if an adult asks them, “Did you say (sound pronounced correctly), they will say ‘yes.’ They hear the sound correctly even though they are not yet ready to pronounce it correctly.”
The study confirms what researchers have known about typical development, Paul continued. Young children focus on the content of what they are saying rather than the way they are saying it. Children develop the ability to “repair conversations” when they are misunderstood starting around age 3. These skills are refined as children get older, she said.
“Our work highlights the importance of social interaction, such as conversation between caregivers and children, in the development of children’s speech production,” said MacDonald. “While the present study focused on the normal development of speech production, we will be investigating potential applications for understanding and addressing delayed and abnormal early speech development.”
To help build their children’s language, parents should focus on what their young children say rather than how they say it, Paul said.  If a child has a speech error, parents should say the sound correctly in their own speech, but they should not correct the child in the early stage of speech development.
Paul gave the following notes and tips for parents to understand their children’s language development:
Children do not learn to say all speech sounds at once. They say sounds in a predictable sequence depending on the particular language or language they are learning.
Be a good speech model. Speak clearly and use correct speech sounds.
Respond to any of a child’s attempts at communication.
Show that you are listening and comment on what your child says, not how he or she says it.
Talk and read to your child often to stimulate speech, language and listening skills.
By Mikaela Conley
http://abcnews.go.com/blogs/health/2011/12/23/toddlers-hear-their-own-words-differently-says-study/
Posted by Preston Kiddie Kollege at 1:50 PM No comments:

Study: Some Children Remembered Events That Happened When They Were 2 Years Old
By Kathleen Doheny
WebMD Health News
Reviewed by Louise Chang, MD

Dec. 22, 2011 -- The ability to remember our earliest childhood experiences may be in place sooner than experts thought, according to new research.
Some children who played a unique game when they were just 2 years old were able to remember it six years later, the researchers found.
Other researchers who have focused on early memories, however, have said that adults' earliest memories usually start from when they were about 3 1/2 years old.
"We've got relatively objective evidence that people can recall things that happened as young as age 2," says researcher Fiona Jack, PhD, a postdoctoral fellow at the University of Otago in New Zealand. "It's not common but [the study] shows it can happen."
The new findings may have implications for the theory of memory development. The new research may also help in legal settings, where it can be important to know if a memory is genuine.
The research is published in the journal Child Development.

Jack and her colleagues report on 46 children who were ages 27 months to a little over 4 years. When they were ages 2 to 4, they all played a unique game called the Magic Shrinking Machine. The researchers watched them play.
The game includes a large black box designed just for the lab research. To make the machine work, the child turns it on by pulling a yellow lever, selecting a toy from an open suitcase, and putting it in a hole in the top of the box. Next, they turn a green handle on the side. When a bell rings, the child opens a red door in the front of the box to retrieve a smaller but identical version of the toy.
Jack and her colleagues interviewed the children and their parents six years later to figure out how well they recalled playing that game.
Only one-fifth of the kids recalled the event. Those who remembered included two children who were  under age 3 when they played. About half the parents recalled the game.
Both the parents and the children who had the early memories gave the researchers very similar reports.
"We know they are recalling the event accurately," Jack tells WebMD. "We were there."
What may have helped some children remember? Talking about the game to the children soon after it occurred may have helped preserve the memory, the researchers say.
Bottom line? The basic capacity of remembering our experiences may be in place for some of us by age 2, Jack says. However, she says, this autobiographical memory is not fully developed at that age. That takes time.

Early Memories: Upsetting Events Even More Likely to Be Recalled?

Others who research early memories say the new finding fits in with their own recent conclusions. "These findings contribute to an emerging body of evidence showing that many children can reliably recall events many years later from when they had been only 2 and 3 years of age," says Carole Peterson, PhD, a professor of  psychology and university research professor at Memorial University of Newfoundland in Canada.
In her research, Peterson interviewed children soon after they had been injured seriously enough to need emergency room treatment. They had broken bones or serious cuts, for instance. "Five years later all of the children could recall a lot about these injuries, and most of it was accurate," she tells WebMD.
She compared the kids' memories with interviews of adult witnesses to the injuries. The adult interviews were done shortly after the incidents.
"The children who were at least 28 months of age all remembered accurately," she says.
She has also found in another study that children recalled events from when they were just 2 years old.
While fun events like the magic game can be remembered by some children long-term, highly upsetting or stressful events such as the emergency room visit are even more likely to be recalled, Peterson says.
The new findings confirm that at least a few children can recall some experiences that happened when they were just 2 years old, says Robyn Fivush, PhD, professor of psychology at Emory University, and another expert in the field.
However, she also points out that some children, not all, recalled the game. "It was only nine children, 20%, which means that 80% could not recall it," she says.

Parents who want their child to remember certain early activities should talk about it after it happens, the experts agree. "Talking with children about [important] events increases the likelihood that the event will be remembered later in their lives," Peterson says.
According to Fivush, "Memories which are talked about within the family are better recalled as children grow older, so if there are special memories that you want your child to cherish, bring them up in conversation and reminisce with your child about these events."
Unique experiences are likely to be remembered best, she says: "Think of all your childhood birthday parties. If you recall a single one, it is probably because it was different in some distinctive way from the others."
Posted by Preston Kiddie Kollege at 12:02 PM No comments:

This Christmas, have some fun (and make a little mess) with your kiddos! We have gathered some Christmas cookie recipes from ricekrispies.com that are SUPER easy to make, crafty, and tons of fun for your kids (not to mention, they are pretty tasty).


Here are some of our favorite picks:

Ornament-shaped desserts you can decorate 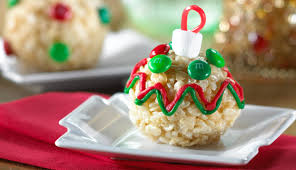 RICE KRISPIES TREATS®
Your kids will love decorating these little trees just as much as they do the real one. Serve these green goodies to your holiday guests; just don't forget to save one for Santa. RICE KRISPIES TREATS®
Make these jolly, round faces with your kids on Christmas Eve. Then leave them out for Santa to enjoy while he delivers presents.